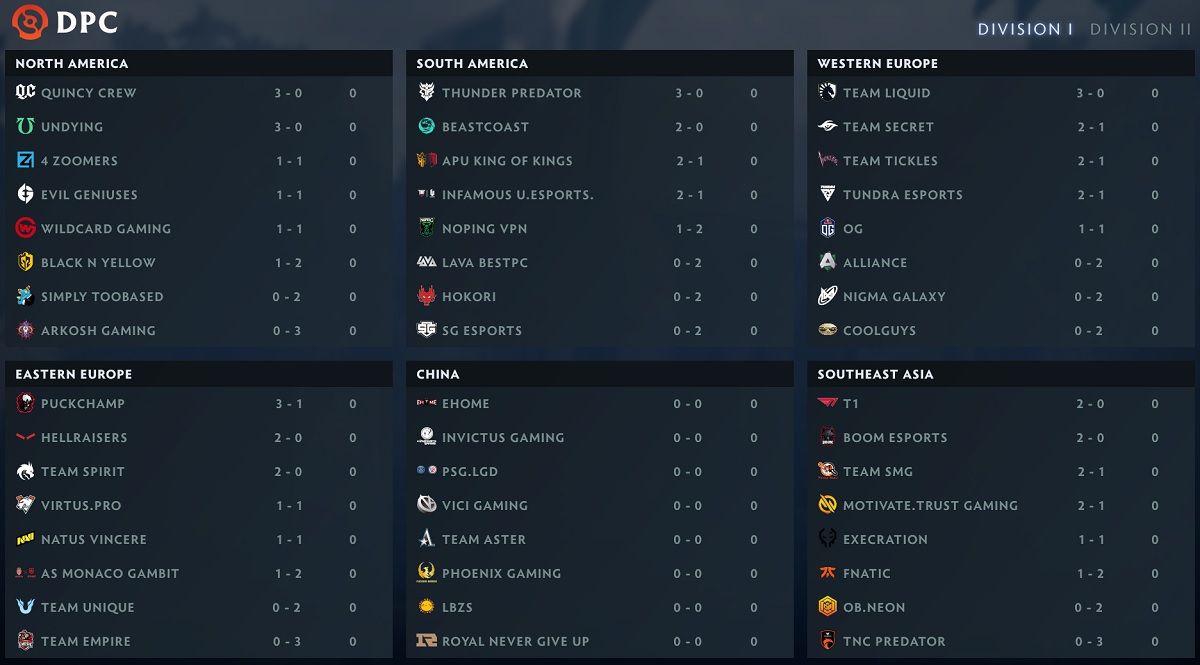 One good thing about Dota is that even when it technically stays the same for a prolonged period of time, players will still find ways of surprising their opponents. We are not sure whether this is what is allowing many younger, less experienced, and more experimental teams to overcome the veteran opposition in the regional leagues, but from a viewer’s perspective, Dota is still really enjoyable and really diverse.

Evil Geniuses is the only team that is performing below expectations. Their loss against Black and Yellow came out of nowhere, but a Bo3 loss is never a coincidence. Perhaps the team is still looking for its footing or perhaps there is already a reshuffle starting to brew, but EG definitely needs every single win from now on to have a chance to get to the Major: both Undying and Quincy Crew haven’t lost a single series yet.

Beastcoast and Thunder Predator are ahead of the pack, just as predicted, with Lava falling behind. SA, much like NA, is a region with only two Major slots: one playoff and one group stage seed, so the competition is going to be fierce. Though given the difference in the level of play so far, perhaps it will go as expected.

After a shaky week one, Team Secret managed to 2-1 Tundra Esports, restoring the faith in this household name. Team Liquid are also doing exceptionally well, but they are yet to face the toughest opponents in the league.

Nigma Galaxy, on the other hand, is not having a good time. Playing with a stand-in in the middle lane is one of the worst experiences a Tier One professional team can have. They will have Miracle back for the remainder of the league, but will it be enough to get to the Major?

The youngest league is full of surprises. PuckChamp, a relatively unknown squad is still doing incredibly well, now solidifying their position with an extra victory over Empire. 3-1 with their only loss being to the current TI Champions is a good result and the opponents they have to face are not necessarily at the peak of their game.

Both Na’Vi and Virtus.Pro managed to stop the bleeding with their victories over Empire and Gambit respectively, but neither of the series was a clean sweep and when playing against the outsiders, this is not the result one is looking for.

It is a little too early to tell what teams look the most promising in the SEA. BOOM, T1, SMG and Motivate.Trust were all impressive in their own way. What we can discuss, though, is that TNC is most likely not making it to the Major and might even be relegated to the lower division next season.

They did face off against T1 and Motivate.Trust already, so a couple of tough opponents are out of the way already, but this is the beauty of SEA Dota: every opponent in Division one is potentially a tough opponent. Are they guaranteed or even expected to win against Execration, BOOM and SMG? We don’t know, but what we do know is that so far the SEA league has been the most entertaining one by a huge margin.

One hero making a comeback and forcing his way into the meta is Outworld Devourer. A hero long forgotten is now among the most coveted flex picks in the game: we’ve seen him being played in all three core positions.

The no boots, Meteor Hammer build is a little bit silly, but it is extremely effective and is usually the default for the hero when played as a mid or as an offlaner. It is a lot of pushing power, farming speed and teamfight presence and that makes the hero incredibly scary come early midgame.

In the later stages of the game he is among the best answers to the usual suspects: his pure damage is incredible when dealing with heroes like Terrorblade, Phantom Assassin, Morphling and most other Agility carries. Moreover, we’ve seen an interesting adaptation in an Witch Blade, which is not necessarily the best of items in theory, but comes in incredibly handy when dealing with evasion.

The combination of Arcane Orb+Witch Blade Attack into Astral Imprisonment+Meteor Hammer combo into a possible Sanity’s Eclipse is more or less guaranteed to kill 80%+ of the existing carry hero pool, as long as they don’t have a BKB. Given how early OD can get to this point, his popularity and success is unsurprising. As the Peruvians say: "Gaaaaa!"