The distinction between hard and position four supports is relatively new, but it is an important one. Whereas hard supports are heroes who require little to no farm to be effective and typically don’t benefit from having extra items, position fours are heroes who start to truly shine with the help of extra mobility, survivability or utility.

Who Are Position Four supports?

Given the variety of Dota heroes, it is really hard to give a definition of a position four support: sometimes it is a roamer like

Earthshaker, who sets up kills around the map during the laning stage and then transitions into initiator for his team. Sometimes it is a scout, like

Nyx Assassin, who finds kills and advantageous ganks for his team, while providing disables during teamfight. Sometimes it is an all-out nuker like

Zeus or a mix between damage and utility like

There isn’t much overlap between these heroes when it comes to their playstyle. One thing they do have in common, though, is that they all require a certain degree of farm to take off, while mostly being decent heroes with no farm as well.

For this reason, some typically position four heroes can be played as hard supports, while others are sometimes picked with position three offlane in mind or can even fully transition into a core role by the end of the game.

As such, this role is often thought of as having one of the highest skill requirements from a player: you need to be very good on a variety of heroes, with completely different playstyles. It also makes it one of the most interesting roles to play.

Understanding the needs of your team

In an average pub game, you are going to be picking either second or third, so you will see one or two enemy heroes before you make your hero selection. Do take this into account and try your best to discuss the general draft with your team before picking your hero. Bad hero matchups against enemy heroes isn’t as much of an issue for a position four support, as it might be for a mid player, but the synergy between your hero and the rest of your team is crucial.

Are your teammates going for a glass cannon carry and a nuking mid? You might want to go for extra utility on your hero, with a lot of disabling power, to allow them to deal their damage. Is your team lacking push? You need to take a hero who can be effective both in terms of teamfight and shoving waves. Position four support often has to be the glue that holds your team’s draft together.

Also do keep in mind that your hero will often have to pair up with your cores or your second support when ganking the enemy. Having the ability to play around your teammate’s strengths or having your teammates playing around your strengths might sound like a myth in a low-coordinated pub game, but it more or less occurs naturally, if heroes complement each other well.

Position four support is frequently the most inconsistent and volatile role: many heroes who fall into this category can be very hit or miss, depending on the start of the game. Earthshaker with a couple of good early game rotations and a

Blink Dagger at minute 13 is very different from the one who got counter-ganked in his first few attempts and still can’t get his first item at minute 20.

As discussed previously, position four heroes are typically slightly greedy. In most cases they might do their job well enough with an item or two, but any additional purchase bolsters their chances of success, making them stronger for the next engagement and so on and so forth. You need space and you need to know when to use it.

There are several important farming windows, some of them recurring. First one typically comes when one of your cores can no longer play safe in his lane, but it still needs to get outpushed. Their tower got destroyed and they are going to jungle to farm up, meaning that the lane is currently unoccupied: use this small window to get closer to your first important item. Sometimes it is easy to combine this farming with a gank on an enemy hero first.

In fact, you can get a wave of creeps after every successful precision gank. Won teamfight generally means you get time to push with your team, which is always preferable, but small two or three-man ganks are usually performed to take an economic advantage and maybe delay an item on the enemy. After the kill, the map is slightly less threatening and you get to farm. If the enemy does retaliate, it provides your cores with information on their location and maybe forces a teleport as well, so your carry gets to farm more aggressively and perhaps deeper in the enemy territory, increasing their efficiency.

You also sometimes get to farm when your team loses a teamfight and is unable to retaliate to an enemy push. When the enemy is grouped up and you are a man down, unless you have some long-range wave-clear it is better for you to farm up an item on the other side of the map, instead of throwing your life away. Chances are it will mitigate some of the economic deficit while also forcing the enemy to respond. Heroes with strong push are especially good at this, since they can sometimes even get an equal objective trade after a lost teamfight.

You are still a support

We firmly believe that all roles contribute equally to the team’s victory or loss, but if it comes to it, you should die for your carry or your mid. Don’t die unnecessarily, but make sure you are there, between the enemy team and your retreating cores after a lost teamfight.

You should also have some Sentries or Dusts when dealing with invisible heroes and Warding, especially given how wards are free, is not beneath a position four hero. Since you are frequently going to be the one shoving waves, you can use this time to ward as well, while rotating out of the lane.

Having a Smoke of Deceit in your inventory is also never a bad idea, especially in the early mid-game: as discussed previously, your team is going to play around you after the laning stage and concealing your movement can lead to some easy ganks.

Supports are getting more and more attention and respect and some of the most notable players in the game are position four supports. It is one thing outplaying an equally farmed opponent and an entirely different thing solo killing an enemy core double your net worth.

While heroes who were capable of the aforementioned feat have been toned down substantially and Valve have admitted that it was one of their biggest balance oversights, position four supports can still be flashy and impactful in the right hands. 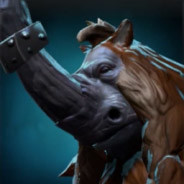 I'm starting to think position 5 is slowly becoming obsolete with position 4s becoming the standard as a support. at 4k bracket there are sniper picks as 4 ending up in a total disaster but my man still trying to buy full carry dmg :)