7.07b helped bring Tiny back up near his old win rates, but it isn’t enough to help the hero in the meta.

With the exception of Morphling and his associated bugs, Tiny had the largest decrease in win rate coming out of 7.07. His Aghanim’s Scepter buff was replaced in favor of a new skill, Tree Grab, aimed to rebalance the cheesiness of the hero to backdoor towers and eke out late-game victories. In the hands of capable players, a team with Tiny+Wisp was rarely out of the game, despite any gold disadvantage. The issue did need to be addressed by Valve, but the current solution in 7.07 put Tiny with one of the lowest win rates of the game.

While the old Tiny was formidable in his own right, his power was amplified by pairing himself with Wisp. Io not only helped Tiny dominate dual lanes, it unlocked his late game potential. Any briefly vacant lane was at risk of getting erased in seconds, at any time, from anywhere.

Then, in patch 7.07, came the introduction of one Io’s new talents, “Tether Grants Scepter Bonus.” With this update to Io, only a level 15 Talent, Tiny couldn’t exist in his current form. Imagine if Tiny went unchanged. The Tiny+Io pair would be the most unbalanced duo in the game.

The charges to Tree Grab ensured that Tiny couldn’t erase lanes the same anymore. He could peck away at them, 6 whacks at a time, every 15 seconds. It was bare consolation for not having to buy an Aghanim’s Scepter, but with the way the new skill works, Tiny was no longer the tower pusher nor the fighter he was.

The Fault With Tree Grab 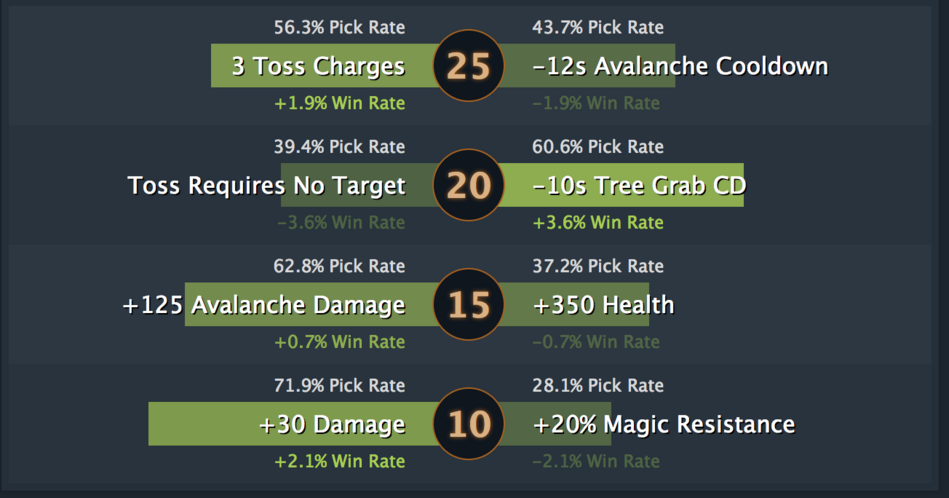 The -10s cooldown Talent is almost a necessity for the new Tiny.

The glaring issue with Tree Grab now is that it’s a diluted version of his former Aghanim’s upgrade. By having charges and a cooldown, it’s as clunky to use as Clink’s Death Pact, a cornerstone skill that has windows of vulnerability, requiring a player to always keep an eye on refreshing the skill. Except with Tiny, the skill does not have 100% uptime (the cooldown begins once charges are depleted), and it is unreliable in a team fight.

At level 4, 6 charges can often suffice for small skirmishes, but players won’t always have all 6 readily available for teamfights. For the most part, charges will be consumed for farming and clearing waves. And unless players choose to save the skill for a team fight, they’re choosing to hamstring their own farm so they can be more useful in a fight.

But then came 7.07b, greatly reducing the cooldown of Tree Grab across all levels and increasing its damage. While Tiny's win rate is hovering nearly the same it was before, his popularity is rising in the professional meta. Recall that he was one of the few unpicked heroes at TI and in the weeks after.

As Tiny has changed, so has the game around him. All buildings have more armor, from towers to shrines and barracks. Intelligence heroes, once the #1 victims for Tiny’s Toss+Avalanche combo, now have added resiliency with the new stat “perks,” which for Int heroes gives them additional magic resistance. A level 25 Pugna now has 40% Magic Resistance, without items.

Where does Tiny fit now? With 0 armor, the removal of Poor Man’s Shield and Bottle ferrying, and a greater disadvantage from having creeps denied, Tiny is no longer reliable on his own in the mid or offlane, and he’s more reliant now than ever on an able lane partner. That puts him to the safe lane, even if his potency as a late game fighter and pusher is more limited than before.

Blink Dagger+Echo is still a deadly burst combo, along with Toss and Avalanche. Tiny can still carry the mid game. But the change to Tree Grab has opened up doors for Tiny. It frees him from saving 4200 gold for a necessary farming item, while allowing him to clear stacks and waves earlier in the game. EG recently took advantage of this during Dreamleague, with Arteezy on Tiny and maxing Tree Grab early on.

7.07b brought a sweep of changes to offset the sheer drop in Tiny’s power. Tree Grab got buffed across the board, Toss gained some damage it lost from Grow’s tweaks, and Tiny now starts with 4 more Strength. Overall, it has expanded his role as a safelane farmer, than reliant on an Io partner and late-game cheese. Tiny’s pick rate is an all-time low (70th in popularity) and his win rate is worse compared to his old version, but if what is happening in the pro scene is any indication, his popularity will grow. Does zero agility increase killed Tiny? Or it just limited Tiny to be an unstoppable late-game core? It will be interesting to see how this new version of Tiny works out. Exciting times ahead

"isn't enough to help the hero in the meta"
That's why we've seen several drafts with Tiny being dominant in pro scene these past days?

At least his annoying passive has been removed This new tiny is way way more fun. I tried him with a shadow blade and SnY and there was never a tree that was not thrown. Can Tiny still output the damage output of a reliable late game physical carry like PA or the nuke burst of someone like pre 7.07 Morph? Or is he pretty bad late game in comparison to other traditional carries now? Check out my profile on how I've been playing him. I play him as a mid or off laner mostly. The way I'm playing him is definitely not as a front liner, but as a ganker to make space for my cores. Grabbing blink and throwing a tree in before blink ava toss combo is super strong especially with the bonus avalanche damage talent. I'm only 4k so my word sure ain't law, but it's whats been working for me.

What's the bug with morphling? This article missed the one positive change tiny revived, status resist. 40% is a big number and if you stack strength items on him you end up around 75% late game. That itself is huge. He is hard to lock down. Zero armour is not so much of an issue with 5k health and practically unable to be locked down. Treegrab with stacking STR items allows him to flash farm early. Nothing can be bad about clearing an entire creepwave at lvl 12 in two hits. Satanic, armlet, treads, heart, halbert, and a.c.. good attack speed and hit 560 a swing and that's without the 30% bonus. Let's do some rough numbers. 425 avalanche with talent, 360 for toss with bonus dmg, 728 for tree grab swing, and 728 for quick tree toss. That's 2241 dmg without doing a perfect blink toss combo.

@ GLOBUL The agi nerf to tiny makes almost no difference to his strengths. The change was 9+0.9 to 0+0, which if you scale all the way to lvl 25, is only 30.6 agi less. That is just 30 less attack speed and 4.37 less armour (remember before 7.07, 7 agi = 1 armour), both of which can be easily supplemented by armour and attack speed items, which tiny is going to get anyways.

@mllcg The Morphling bug is that you have toss without CD if you morph into Tiny. You can literally throw an enemy into air 20 times in a row, given you have the mana pool. you genius bro , nice to read your words